What are the different British deer species?

What are the different British deer species?

There are six deer species in the UK. Some are native and some have been introduced, but what are they and how can we tell them apart?

Red deer are the largest of the British deer species, standing at around 115cm at the shoulder. They are called red deer because of their red summer coats but have brown or gray coats in winter. They have long, slender faces, big necks and the males often have large antlers like this fellow in the video below.

Red deer are mostly found in the Scottish wilderness but can be found in northern England, Norfolk and even in Richmond park in London! We captured our first red deer on the camera traps during our Yorkshire Pine Marten Project – a few individuals from a small herd on the North York Moors.

Only the males have antlers and these grow annually – up to an inch a day.

Red deer also have white spots when they are born which completely disappear before adulthood.

Roe deer are Britain’s most common deer. In testament to this, most of our deer captures are of roe deer rather than any other species – particularly on the North York Moors. In fact, roughly 36% of all wildlife captures from the Yorkshire Pine Marten project are of roe deer.

They are smaller than red deer with a shoulder height of around 70cm.

Roe deer side on

Easily recognisable from their white rump, round faces with black noses and small antlers, these are beautiful animals. When alarmed, roe deer will make a barking noise to let any threat know that they’ve been spotted and also to inform other roe deer.

Roe deer sleep in ‘scrapes’ where they dig a bed for themselves on the forest floor. We’ve been fortunate enough that our camera traps have witnessed this behaviour a few times before – see the video below.

On our cameras, we usually catch them alone or in groups of 2 to 4 individuals but in the winter they can move in herds of up to 15.

Fallow deer were first introduced to Britain by the Romans. In captivity they are bred to have characteristic white ‘Bambi’ spots on their coats but they lose these after a few generations in the wild. They can have chestnut, black or even white coats.

They are the second largest UK deer species (typically around 75-95cm tall at the shoulder) and are the only deer in Britain with palmate antlers (shaped like an open hand) – so it’s quite easy to identify the males.

The muntjac is also known as the barking deer because of it’s distinctive call. It is the smallest of the British deer, with a shoulder height of around 48cm. They have golden coats and very small antlers.

We caught our first muntjac deer on camera trap back in 2014.

They can be found in most English counties now and parts of Wales. Muntjac were introduced into the wild in Britain in 1925 after escaping from stately gardens.

It is thought to be the first modern deer species, having evolved 15-20 million years ago and changing little since then.

Chinese water deer are a similar size, shape and colour to the reeves’ muntjac. They have a wider, rounder face than the muntjac, don’t have antlers, and have ‘vampire teeth’ that males use to fight over females.

They are originally from China and Korea but around 10% of the world’s population live in Britain – this figure is high because they’re actually classed as vulnerable in the wild.

Sika deer were introduced to Britain from east Asia. They naturally  have very variable coat colours but most of the British population are a dark brown with faint white spots on their coats and white markings on their lower legs.

They closely resemble the red deer but are a bit smaller at around 89cm at the shoulder.

We are yet to catch one on our cameras but here is a picture so you can tell if you’ve caught one! 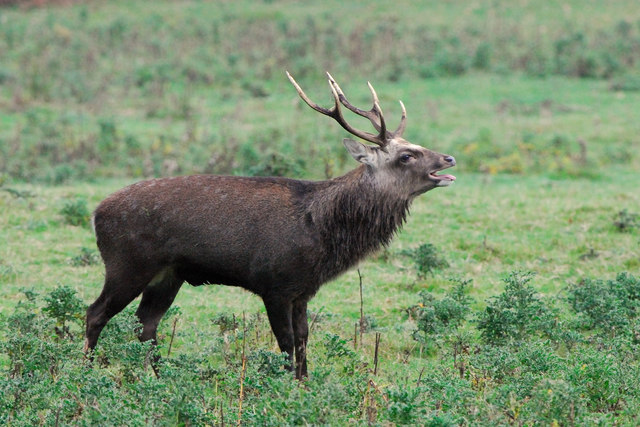